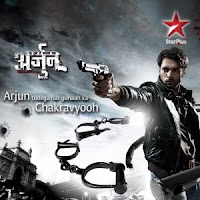 I have almost no time and patience for Hindi serials but I have to admit the promos for Arjun had my expectations riding high. How did I come across this serial you ask? Well it was during a time I used to watch Ek Hazaaron Mein Meri Behna Hain, at a regular basis. I'd dismissed Arjun to be much like CID, but I was interested when my mother (who likes a crime thriller or two), made me sit with her watch the episode.

It was well into the series, the first episode that I saw, but with a lot of questioning and a few guesswork, I managed to understand that Arjun is about the E.T.F (Emergency Task Force) who work in highly complex cases, which is headed by Sameer Rathore (Behzaad Khan), and consists of Riya Mukherjee (Sana Khan) who is a research expert, Shreekhant "Shree" Sen (Siddhart Sen) the techie, Chandrakant "Chhotu" Patil (Ketan Karande) the commando, and is joined by Arjun Suryakant Raute (Shaleen Malhotra) the team's second-in-command.

Arjun's past is shrouded in mystery, and bits and pieces are offered to the viewers to keep their attention engaged. Arjun's wife, Roshni, had been brutally murdered in front of him and rumors say that Arjun had something to do with her murder...though what is the real truth, the future episodes will tell us.

Aired of Saturday and Sunday, at 8:00pm, Arjun, deals with individual murders on every episode, unless a single case is split into two episodes. At the same time we learn more about Arjun and the E.T.F. It is quite clear that there would be a romantic connection between Arjun and Riya, although till now they've shown nothing but contempt for one another. Towards the last episodes which were aired, Riya has grown to respect Arjun, and Arjun still tells her to go back to the research department because of Riya's inability to shoot when they're on field.

We know almost nothing about Shree, Rathore, and Chhotu's background. Riya's refusal and inability to shoot gained spotlight in a number of episodes. Hopefully in the coming episodes, along with Arjun's past, we will get to learn more about the other E.T.F. members.

In a time when most of the serials on the T.V. are a dud, it is a relief to watch Arjun during the weekends. So, happy watching the serial the next time you tune into StarPlus!
Email Post
Labels: arjun castle chhotu crime drama ETF fiction rathore review riya romance. shree star plus supercop tv serial