She's universally popular as the author of the Princess Diaries series. But what makes me really love her, is the fact she writes for all ages. Young readers, young adults and even the adults. Meg Cabot has something for absolutely everybody. Initially I thought I'd write a review for every single book of hers that I read, but I decided to combine all those reviews into one post. So, here goes:

1. The Princess Diaries Collection: I'd seen the Disney movie, and let me just say that they'd gone too far sugar coating it. Mia Thermopolis on her fourteenth birthday discovers that she is actually the heir to the throne of Genovia. Her father is very much alive but he is unable to have more children, and that is the reason for him suddenly recognizing Mia as his heir. What follows through the next nine books, after the first one, is the journey Mia makes from being a rather silly and naive girl to a wonderful little woman. It traces her progress, from the time when shes starts out at 14 and turns into an adult, 18, in the last book. Besides all the misadventures Mia has; her one true love, Michael Moscovitz, is always there. Throughout, even she pushes him away. It is hard not to fall in love with a boy like that. Wouldn't you agree? Princess Diaries is what made me a die hard Meg Cabot fan. And I've been that way ever since I blew Rs 1768 buying the boxed set, last year.

2. Avalon High: To be quite honest, this is the first book of Meg Cabot's that I had read. I was watching the video of 'If I die young' by The Band Perry, and they use the book the Lady of Shallot in the video. So I kind of did and google search, one thing led to another and before I knew it, I had watched Avalon High, the Disney Channel Original movie, got sorely disappointed and decided to buy the book. Let me just say even though there's much less action in the book, it makes a lovely read. Elaine has moved with her parents for their sabbatical and is forced to recognize that everyone around her just might be the reincarnation of the characters in Arthur's legend. But what is Elaine's role in the whole story? That is what makes one go on reading the book, turning page after page...and describing cute boys in the lead has always been an added bonus. Originally meant to be a stand-alone novel, Avalon High has been taken forward in Manga style sequels...sequels that I've not yet read.

3. Teen Idol: This book I bought for my friend's birthday and I ended up reading it before she got hold of it. Jen Greenley is everyone's best friend. Her natural ability to solve problems makes her become the school's anonymous counselor, Ask Annie's Annie. Her little world is turned upside down when she is appointed as a personal assistant to Luke Striker, a teenage Hollywood star. Unknown to her, Scott, the school's editor has always harbored feelings for her...and Jen doesn't know that she fully returns them. Would the presence of Luke bring those two closer or are there more problems in store for nice little Jen? That was the basic premise of the book. And it had got me thoroughly engrossed in it, till I turned the last page. Then I breathed deeply. If you like teenage fiction and high school stories, this is just for you. 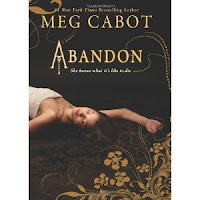 4. Abandon: I can't really remember what prompted me to get this book. Maybe the cover, or maybe the amount of promotion they were doing for it...nevertheless, I went ahead got a copy. All I can say is, Pierce Oliveria, is one unlucky girl to have escaped the realms of death the way she did. Of course, no one ever gets to come out of their alive... So Pierce's life has never been the same. Thanks to the necklace she now carries around, which John had given her, Pierce attracts trouble wherever she goes. I remember liking this book because it was making a chill run down my spine, and the plot seemed interesting. Meg Cabot's modern take on the myth of Persephone, made me really take notice because it had been one of my favorite legends growing up. Wanting to know how the story would unfold, I pre-ordered the next installment.

5. Underworld: The second book in the Abadon series, was to say the least, a bit of a let down. I think my expectations were a little too high for the second book, after a mind boggling first book. Nevertheless, Cabot was successful in taking the story further. Though I can only imagine how fat the last book in the trilogy would be, if she intends to tie up all the loose ends. Underworld is the story of how Pierce gets away from the realm of the dead and comes back to her world, and once again, mayhem follows her... 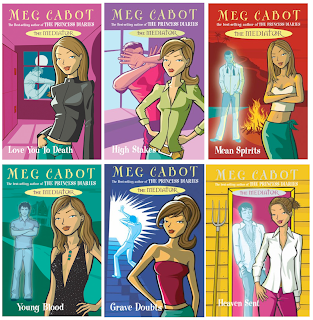 6. Mediator Series: It is quite funny that the series I loved best about Meg Cabot, is the one I discovered last. I bought all of the 6 books at one go, and had had a marathon reading session for four days straight. Mediator follows the sixteen year old Susannah Simon, who has the unique ability to see, hear and even feel ghosts! Hot headed and fiery tempered, she gives poor Father Dominic, a fellow mediator and the principal of her new school, regular heart attacks due to her eagerness to kick some ghost butt. Her love interest, Jesse de Silva, happens to be a ghost, who has been haunting her bedroom for the last 150 years...despite all odds, she falls in love with him, and irrevocably so. The six books, with stories of their own, take forward the themes of living with a new step family, of unrequited love, and of course, fate. Mediator is by far one of the best works of Meg Cabot, in my opinion. It's sad the series ended. I would've loved to see what else the Suze could get up to, given that she never did learn to control her temper...even in the end!

Other works of Meg Cabot which I intend to read and review later are:
1. All American Girl Series
2. Airhead trilogy
3. How to be Popular
4. Jinx
Email Post