I had arrived on Saturday...my plane delayed by 4.5 hours to Singapore. I had actually been looking forward to this trip. Which, by the way, is a first for me. I was practically shipped off the first time in December 2010...and the next time, my head was too up in the clouds to care about being out of the country. Not to mention the jealous and snide remarks I had to endure for being lucky enough to travel out of the country 2 times in a row. But this time it was different.

I was not being shipped off against my will. Nor was I suffering from the whole love is an open door syndrome. I wanted to do something for my 25th birthday. Celebrating it with my sister after nearly seven years seemed like a good plan.And by God, it took such a long time to execute. The saving began from last year. And lastly,the timely arrival of my arrears, helped to let me by sufficient dollars. (Although being the generous and loving brother-in-law and sister, they haven't let me spend anything yet. Except the cab ride home...and I insisted on paying that and why we'll find out soon!)

So my very paranoid sister called me on Wednesday night and asked if I could travel to her house by myself. I shrugged and said, "Sure...why not?"

But she went on to give me explicit directions about how to reach her house...etc etc and then we both realized she'd mistakenly believed I'd be coming down on 21st of August. I had to correct her...I was going on the 23rd, but coming back on the 21st of September (and at an ungodly hour). Don't make me go there now!!

Anyway...Saturday dawned. And everything went smoothly (except the Rs 3,006) I had to pay for the excess 7 kilos. (People really haven't heard of this amazing service called worldnetexpress.com...I wish they had. It guarantees delivery in 72 hours..and let's poor students like me who saved every paise possible for this trip save their next month's stipend.) Even the guy who was weighing by luggage felt sorry for me. And despite my passport clearly stating I was born in 1989, he assumed I was a kid from school.

And another thing - everyone happily assumed that I was someone who could speak in fluent Hindi. Well, I sure burst their bubbles that early in the morning. Anyway...as I waited for the plane to arrive...I observed my fellow passengers. I'm not as lucky as our resident Shameless Blogger. I didn't run into any interesting people...except a didi, who just wanted to get back home to her husband and was whining about it. I found myself secretly praying that my seat wasn't next to hers.

I'd asked for an aisle seat because, it's easier. The window seats have never attracted me anyway...given that I'm pretty mortified of flying. The stupid guy stuck me at the very back seat of the air plane!! I'd settled down on my seat, feeling confident no one would come this far back. But a guy a little older than myself trudged in and asked to get to his window.

Yes, most of you might think that I'd spend the rest of the journey talking to him. But this dude was whispering sweet nothings into his phone and blowing kisses...from what I overheard, his girlfriend was pretty distraught about him going off to Singapore. I couldn't help but roll my eyes when he told her to go off to sleep...it was 12:30pm!! Who sleeps at that hour??

I had better things planned for my journey. I'd already finished Missing by Meg Cabot, while I waited for the plane. I eagerly began to read Paper Towns by John Green. I had no idea when we'd soared into the sky...and I'd drifted off to sleep. I was up since 4:00 am!! I woke up when the air hostess shook me awake saying, "Ma'am, lunch.."

Air India was the only airlines I'd taken to Singapore before this...so imagine my shock when as I ate my lunch, they pushed a strolley down the aisle, saying, "Would you like something to drink?" And I spied bottles of scotch, whiskey and probably every other alcohol on the planet...I had issues with booze. Don't ask me why...I just do. I don't think being 'cool' is equivalent to boozing.

She must have felt sorry for me, "have some water then?" And promptly poured me a glass.

"Do you have any beer?"  the dude next to me asked.

He must have seen my look of utter disgust..because our journey was spent in silence. Anyway,I was too involved in Quentin Jacobsen and Margo Roth Speilgman  to care really. If the dude is a blogger, I bet he's describing me as snooty bookworm, who wouldn't even say hello!!

I really liked DrukAir. The air hostesses were really nice. They kept offering refreshments...always wanting to know if you're okay and concluded the journey by offering mints to all the passengers.

You know, I owe John Green a big thank you. His book saved my life from boredom...and I'd never had a more entertaining flight...although the number of flights I've taken so far is limited.

There was a huge queue at the immigration, but I was too busy worrying about my beautiful purple luggage to care. I had to know it was safe, because...well, all the gifts were inside my bag. And I had to pay fucking Rs 3,006 for the excess baggage. Grr...

Once I'd been cleared...I rushed off to find my beloved bag. You see this is a middle sized suitcase my mum gifted for my 25th birthday. (Don't worry...you guys haven't missed it yet.) I guess it symbolizes getting out of her house! I found it sitting patiently for me in belt 22...after having asked an official about it. Then I took a taxi and tried to get home.

"They usually know where Villa Marina is. Rare exceptions they don't..." my sister had told me. guess what kind of  cabbie I got? the rare exception... she'd given me explicict directions just in case and they came in handy,  as he cross-checked it with his GPS. And soon we were at Tower 21. 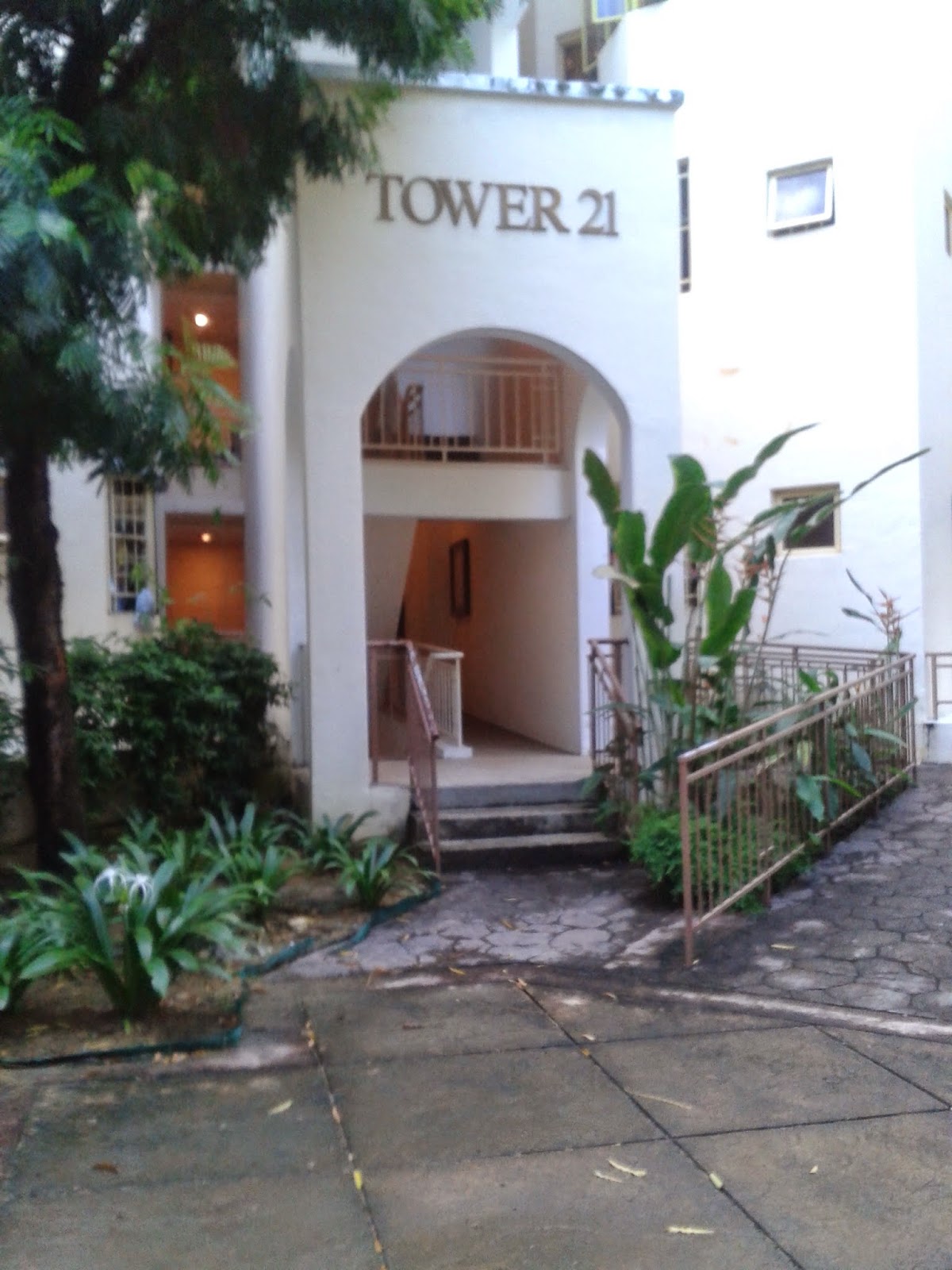 I clicked this picture today...when I came home on Saturday, it was nearly 9 o'clock. We went out yesterday for a movie. It was a good movie called "Boyhood". And today I had huge plans to explore the place in the afternoon -but it kept raining. Finally after I had coffee in the evening, Iwent down to the poolside to sit and write. It is a beautiful place indeed. 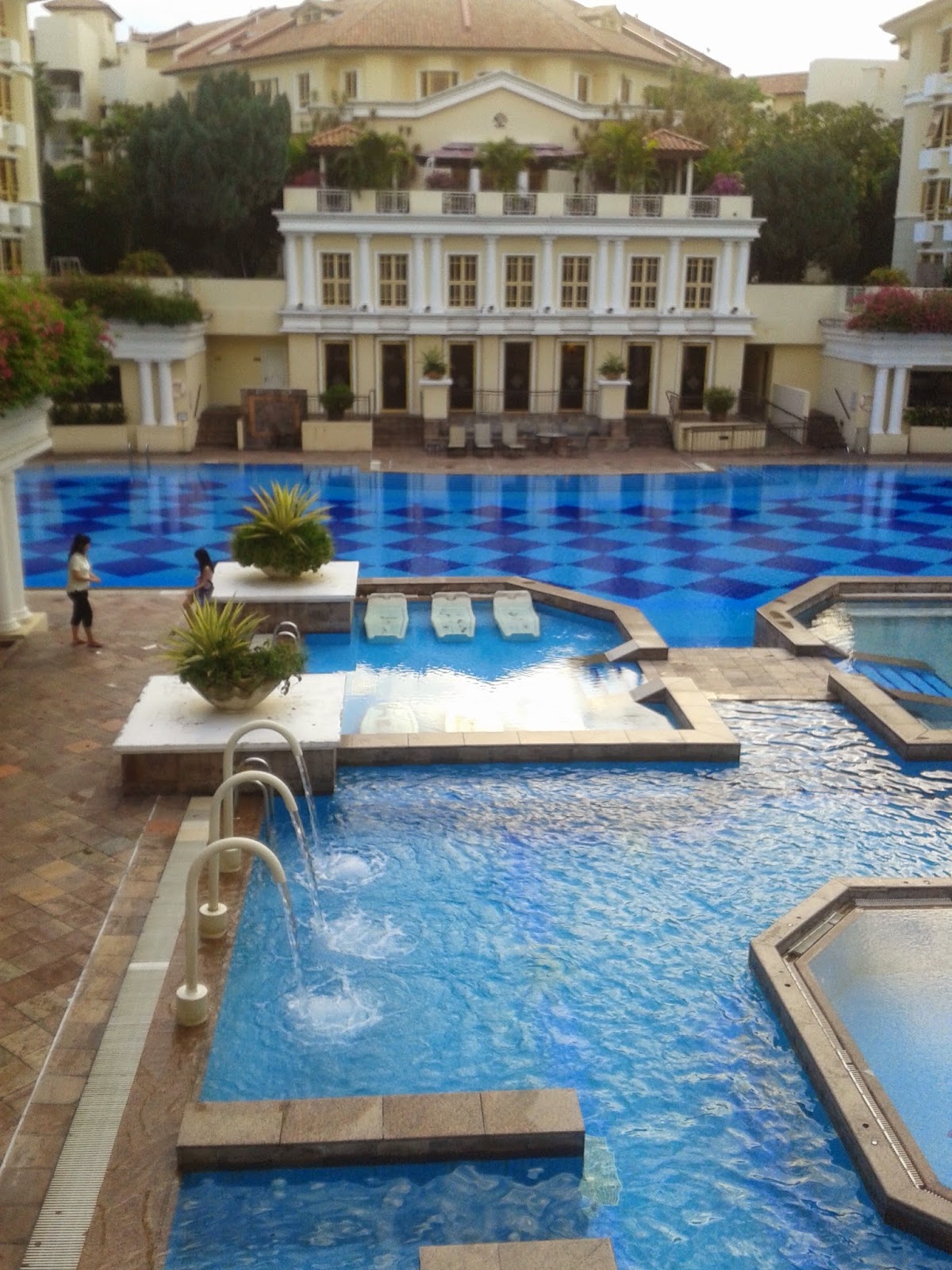 But I decided to sit on one of those armchairs around the swimming pool and write my heart out...then I came back home again.And had to go out to swim...which I didn't mind in the slightest. I like swimming. I only wish, I knew how to hold my breath for a long time.

I guess this trip will be different from the previous ones. For one, there are people my own age here now...in fact, friends I've know for quite some time now. And I'm not as scared as I used to before. I guess I've really started to grow up...will post about some more adventures tomorrow!