Dating is hard. Especially in these modern times. And, as a twenty-something and a thirty-something, Aashna and I had a lot to say about the dating world. 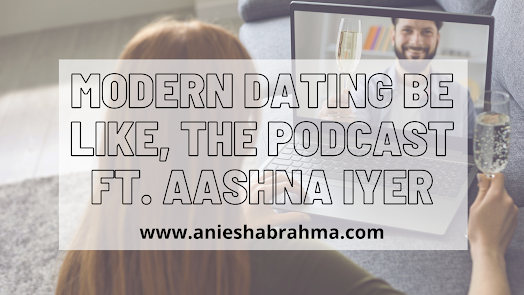 I met Aashna Iyer a few months ago when she joined the company I was previously working at. We met in person once (because we are still living through the pandemic...and honestly? No one knows when it'll end anymore.) Remember how everyone had gone home in March for 2 weeks and it ended up being more than a year? Yeah. That's what I am talking about.

Right before my birthday last year, around August, I met a guy via one these many dating apps that we have at our disposal. Video dating and socially distanced dating was a new thing. In fact, this guy and I clicked on a lot of levels. Chief amongst which was the fact he had the most adorable cat and I had just adopted a lovable, cuddlebug (who later went on to become the CCO for Buzz Magazine), Felix Felicis P. Brahma.

Smokey or his owner are not in my life. The dude went down to grab a pizza and never called me back. In hindsight, when I go over the conversation in my head, I realize that I overlooked plenty of red flags: he bitched about his ex on the first call, his stories didn't add up, and he was perfectly comfortable telling me that he was looking for something serious and steady. And he could text paragraphs...which was exhausting even for someone who texts back pretty fast. And suddenly, one day all that attention, and all that texting just stopped. Yep. I got ghosted.

Look, I get it. Sometimes you meet someone and you realize you don't click. So you let the person know and both of you move on. Sometimes, it is possible to be thoroughly overwhelmed and just stop talking to the other person too. (Been there, done that.)

I've been ghosted and I've been the ghoster too. It honestly does depend on situation to situation.

So, I spoke to a friend and we found out that we were facing similar challenges in the dating world. Around this time I'd discovered the wonderful world of podcasting. I was already doing it for the little literary venture I run and dubbed it Buzz Pod. Later on, I would be doing it for my YT Series, Chai & Chill as well. I got it in my head that we should do a podcast on dating and name it Modern Dating Be Like. I got excited, planned everything and ran the idea by her. Because I wanted her to co-host it....and she said she was busy and overwhelmed. I was also exploring a podcast because well...she told me she was terrified of showing her face on camera. But because my friend wasn't up for it - I put the podcast on hold.

FOR ALMOST A YEAR.

I went home earlier this year because of a few family emergencies. Felix stayed with my friends and their cats, and all of them fell deeply for each other. I think I broke up quite the happy family when I came back to take my beloved catto home. Anyway...I told my friend I'd be going ahead with the podcast if she was busy, and I'd look for a new co-host. She agreed and gave me her blessings.

Thus began the hunt of a co-host. It was lucky I bumped back in Aashna when I did. We were working out of a virtual setup and it is difficult to bump into anyone these days. I told her about the podcast and sent her the document I'd worked on a year ago. She went through it, and it intrigued her enough to say YES.

We added our own touches and twists to it: getting more people onboard for the episodes, sharing our dating experiences, and even got featured on Mid-day as their podcast of the week. During the whole recording, editing, releasing, and promoting of the podcast, I realized that dating, while it feels pretty isolating, is actually a shared experience and you'd be surprised how many people have the same stories.

Now it's almost time for my birthday again, we have just finalized the episodes for season two, and we will start recording the episodes shortly.

It's strange...but isn't it like, one year around the Sun, and we are older, and wiser, and somehow happier than we had first started?

Listen to Modern Dating Be Like on Spotify! Tell us which one was your favourite episode. We shall be waiting.