An Excerpt From When Our Worlds Collide: Akriti Meets Zayn 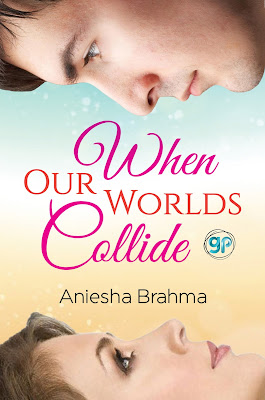 The tinkling of the bell that hung over the café’s door made me look involuntarily at it. A young couple had come in who appeared to be deep in conversation with each other. Both of them had a vague kind of familiarity. I had a sneaking suspicion that I had seen them somewhere. As they approached the counter where I was standing, the girl tossed her head and her eyes met mine. For a minute, I saw the same confusion swim in her eyes. Then her face broke into a wide smile.

“Oh my God!” she shrieked, “It really is you! After you left school, I think we spoke over the social networking sites at least once or twice. I had a feeling I might find you in Kolkata.”

She nodded, ecstatic. I remembered the girl who had made me hold her wrist watch, who had dragged me away from trying to help the boy from ‘another section’.

“Do you like, work here now, or something?” she asked.

“Kind of,” I replied, “My mother owns the café. I have to help out here. Would you like something?”
“You are the heir to a café? No way! That’s super awesome,” Nimmi said, joyfully. Then she looked at the confused face of the guy who was with her and laughed. “Oh, I am so sorry, Zayn.”
“I was wondering when you were going to remember me,” he answered, but it was clear from his expression he was highly amused by our reunion.

“This is Akriti, she used to be in our school for like a month, and then she left,” Nimmi explained, “And Akriti, this is Zayn.”

“You were in our school?” Zayn asked, completely ignoring my greeting, “Why did you leave?”

“I was homesick for my old school,” I explained.

“Well, you should have stayed. I mean the 12th grade was the best time of our lives, wasn’t it, Nimmi?” he asked, happily.

I gave him a wry smile. “So, what can I get you guys?”
---------------
If you liked the excerpt above, please do buy the book here: http://amzn.to/1N1fUiW
You can also check out the book's reviews at GoodReads.
If you want to help me spread the word about When Our Worlds Collide, you can do so by being a part of the Book Tour organized by b00k r3vi3ws tours here: http://bit.ly/1N2gnWj

Book Blurb:
Akriti has led a pretty much sheltered life. Zayn has been shuttled from city to city when he was growing up. She is comfortable watching her life from the sidelines. He wants to feel rooted to a place he can call ‘home’. They meet each other quite by chance. And both seize the chance to be someone they both need in their lives: For Zayn, it’s a 'Partner-In-Crime'. For Akriti, someone who just knows how to be there for her… When their worlds collide, It is not what either of them expected it to be. Zayn has a steady girlfriend. And Akriti has a crush on him. What happens when these two become friends? The biggest adventure of their lives? Or the road to heartbreak? What happens when two completely different people collide? Do they become friends? Or, is their friendship doomed from the start? 'When Our Worlds Collide' is the story of two twenty-three-year olds, Who are finally growing up and finding their feet in the world. A tale of friendship and love, crushes and betrayals, messes and second chances, Marriage and divorce… and the elusive happily ever after!