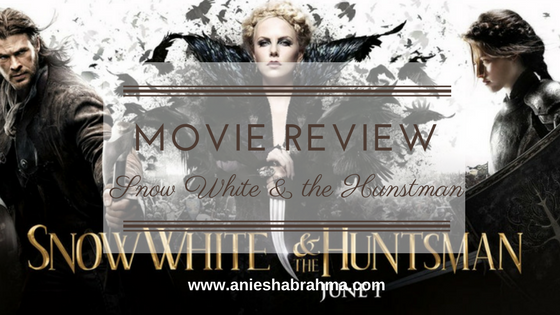 Honestly, this was ONE movie I was really looking forward to. The theatrical trailer had my hopes riding high, and the name kind of gave away the obvious twist in the tale. The huntsman would be the hero. I have always been a huge fan of The Brothers Grimm's fairy tales and hunted high and low for the original versions. The one which didn't have Walt Disney's famous "happy ever afters".

What I loved about this movie was the visual effects...it felt as though I had been transported into another world altogether. The beginning is really intriguing, up till the time Snow White's father meets Ravenna...

The fight scenes have been amazingly portrayed. I loved the actress who played the younger version of Snow White, and the scene where the adult Snow White runs off from her prison just pulls the reader in...

Unfortunately, Kirsten's poor dialogue delivery ruins the rest of it. She's still stuck playing Bella Swan, the awkward girl who had trouble stringing two words together. I thought the way the created "Snow White" in this movie, it required a very strong, feisty, and fiery young woman in the lead. Kirsten's habit of speaking through her gritted teeth, spoils her motivational speech when she urges people to rise up against Ravenna! I was actually rolling my eyes and yawning at that scene.

I am really surprised that the young girl who played the lead in Catch that Kid, and had people appreciating her acting skills and wanting to see more of her, wouldn't continue that beautifully...

Even though Charlize Theron played her character wonderfully. She captured the Queen's fear of growing old all too well, but there seemed to be something missing in her too. You would like her, but not become in awe of her.

The twist to the story is also, that the Queen wished "If only I had a child as white as snow, lips as red as blood, hair as black as a raven's wings, and all with the strength of that rose." ....the reason why the Evil Queen finds it near impossible to kill her.


I wish someone else had been cast in her role. Because the predictable plot (come on, everyone knows this story), made the movie more character driven than plot driven. I liked Chris Hemworth as the don't-care huntsman, but the chemistry between the two forbidden lovers seemed lacking.

William played by Sam Claflin seemed to be a necessary character, only to use what now seems like a cliche (especially to someone who has seen Enchanted).