If you thought being Home Alone is going to be like the movie we all watched as kids, think again. It's not even been a day since my parents went off on their business trip and I've been trying to do only half of what my mother does.

For one, I've completely lost the privilege of having a social life. Once active on Facebook, now I log in once in awhile to drown in notifications. (But thank god for Smart Phones)...at least I'm still connected with the world. In order to tell this tale, let me start from the beginning. 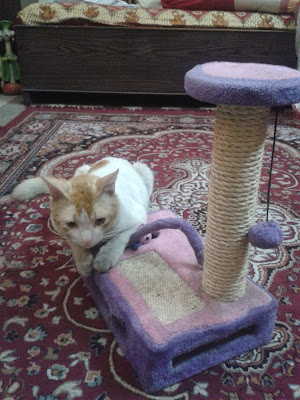 I am a twenty four year old MPhil student who is still struggling to find her thesis topic. In 2012, I adopted a little kitten I had found on my doorstep. Pippo is now almost 2 years old and has his own mood swings. My mother is the only person who can control him when he apparently loses his head. I've been praying that he doesn't get up to his usual mischief during her absence.

So this Home Alone story is about not being so much home alone. Because you see, while Pippo likes to go out into the world every once in awhile - he likes being home too. And he has one ridiculous timetable. He woke me up at 4:45 am today. Me! The girl who has not seen dawn since 2012...I had to get the door for him, so that he could go off into the world for a while.

I woke up again from a disturbed nap around 7 am when the man who drops off the bread rang to the doorbell. I don't know who was more surprised to see whom.

And there was the little white head with the brown patch, poking his way inside the house. It hit me then that he had followed the baker home. My little protector?

He'd done the same thing the last day my aunt came to visit me and convince to go on a road trip. I couldn't go because Pippo would've been completely alone. (Does NO ONE understand that a cat needs company? Even if it is silent company, with me sitting ten feet away from him, typing away at my computer??) I was quite surprised to see my beloved Pippo, with his head titled to one side, watching me. I wonder who is protecting whom at the moment.

Anyway, Pippo went out of the house again when the maid who cleans the house left. He came back with Hermien Aunty and Salil Dadu around 1 pm, meowing away to glory for his food. Once he was done eating...I had to play with him for awhile. Before long, he was lost in his own sweet cat-world and I was free to go have lunch with my family.

Post lunch I couldn't find him anywhere and I kept calling him. He was finally discovered by my uncle, sitting on top of my mother's blanket, looking at me through his beady black eyes. 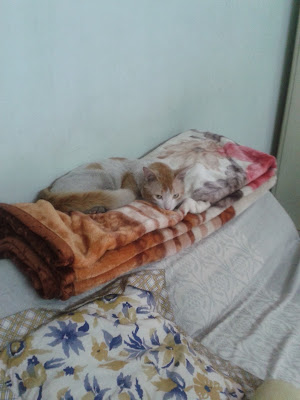 When I sent my sister the picture she said she thinks he misses ma. Well hmpf to you, Pippo. It's not easy for any of us to get through the day without mummy. Now that I'm suddenly in one of her shoes, I can understand exactly the amount of work she does throughout the day.

I had brought Pippo into the house but I've done more to help take care of him in two days than I've done in the past years... Well I did help out more when he was little. Because since he was little, I could pick him up and cuddle him. But now I've to keep my ears open in case he wants something... 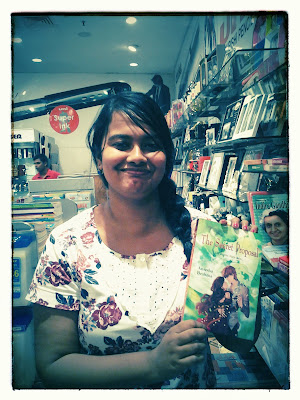 I can be the girl who writes a novel and gets published at 22,

I can be the girl who smiles happily when she finds her book stacked with others in Office Linc, South City Mall,

I can be the girl who gets to stay up late writing her latest work of fiction,

I can be the girl who wakes up at 11 am with a full stomach, because her mother had woken her and made her eat breakfast at 7 am,

and I can be the girl who only cooks when she feels like it,

Because I have my mother with me, every step of the way. Taking care of Pippo is just one of the many things she does during the day.

There are so many little things about her which we take completely for granted. We ask her to do things for us, completely disregarding the fact, she does so much without being asked. 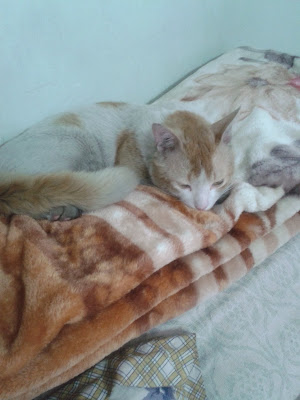 And we make faces like this when we don't get our way. All of you bloggers and readers out there, who have the privilege of having a mother, value her and tell her how much you love her. When she's gone for even a few days, you will realize how much you can get done in the day because she's forever making your work easier.

To those who wonder why some mothers that decide to stay at home, I am guessing they probably chose that because being a mother is a full-time job.

I am glad mine decided to stay home with me when I was growing up. Now that I'm a lot older, I finally understand - I wouldn't have turned into the person I am today, had my mother left me to the care of nannies and other care givers.

She's my mother.
And my pillar of strength.

P.S. But this does in no way mean I don't like being Home Alone. I do love it. I get a lot of time to myself...I just learn to balance things when I'm alone. Because being by yourself comes with it's own deal - you have to make time for others.

And for me, that's Pippo. So excuse me for awhile from the blogging world. I've a four-legged kid to take care of for a few days.
Email Post
Labels: musing personal