My relationship with Arjav had always been strange. We always fought, screamed and hanging up the phone seemed like the only natural solution at times. And yet, there was a part of us which loved each other a little too much. Almost to the point of being rather insane, I would say.


It was actually a miracle that we parted ways. Okay...I admit it, I initiated our parting of ways. But it wasn't the parting of ways which made me think that love truly bites. It was the way we did it.


"You know, maybe we shouldn't be seeing each other anymore," I said, angrily, "No, not even as friends. You can never be my friend."


"Alright, calm down," Arjav said, pleasantly, "You're disrupting the peace."


We were sitting in the cafe, talking about things. Rather shouting about things and perhaps, still not willing to let go off what we couldn't change. At least, I couldn't. I wonder now, whether it was a blessing in disguise, that there was no other customer in the cafe. The only person eavesdropping on our conversation was the guy behind the counter.


"You want to eat something?" Arjav asked.


I glared at him. Here we were in the middle of a heart-to-heart. Or in my case, a heart-to-deaf-ears! And all he could think about was food! I made me secretly wonder how on earth had I never seen that his love for food would always score above his love for anything else.


He flashed me a grin and went to talk to the waiter. I crossed my arms in front of my chest, and stared out the window. My attention came back to the table, when I saw there was a chocolate pastry in front of me.


"Here," he said, slicing the pastry into two. He picked one slice up and put it in my mouth, "Eat it."


But he was grinning at me. Something about his grin made me boil over.  The next minute, I had seized the other half of the pastry and smeared it across his face.


Instead of getting mad at me, or swearing at me, Arjav began laughing.


Love bites - we both discovered that day. Trying to split a chocolate pastry with a girl you're about to dump isn't the brightest of ideas. Neither is throwing the pastry back at the boy's face either.


It was one of the last memories that I have of us together. The only other time I had seen him, I had "runaway" from him. Or at least that is what everyone who's seen me claimed.


"You didn't need to runaway, you know," Arjav had told me months later.


I had snorted, "I wasn't running away. I was just walking really fast in the opposite direction." 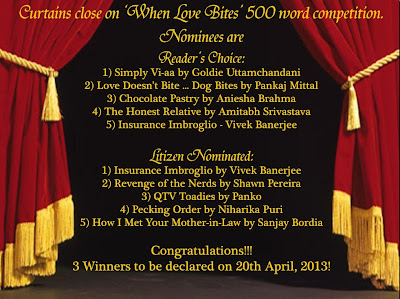 Note: I didn't win this competition, but it was amazing to be nominated for this though :)) I loved taking part in this.
Email Post
Labels: aniesha annoying breakup chocolate competition fantasy fiction flash fiction funny love love bites pastry romance. story