The Tunes of Life 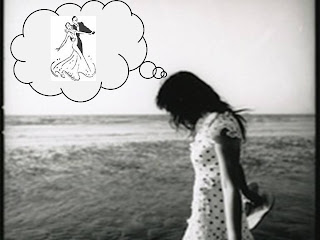 Wonderfully intertwined, with the heart.
Just not in the mind.
She had often see the face in her dreams,
But nothing mattered now.
She knows nothing is ever what it seems.

And he smiled at her from a distance,
Raised his glass, to acknowledge her for an instance.
The he turned away, knowing this is the end.
She whispered to the wind, "Farewell, my friend."

It had been a bittersweet journey for them both,
But they'd sworn no oath,
Nor taken a vow -
To not let things be, anywhere - anyhow.

"I'll keep you safe in my heart," she felt him say,
When he brushed past her, dancing with another, away.
She bowed her head,
But not a word she said.

Tears stung at the corner of her eyes,
However, this was the moment she realized.
It had not been lies,
But that was how...she knew things die.

Watching him dance away, she felt a part of herself go.
Where exactly, she would never know....
She could still feel him - wrapped warmly around her heart.
Still feel the warmth, she'd felt at the start.

They had said this was just pretend.
People merely say, "I am your true friend..."
Yet...
As she watched him glide by,
And quivering met his eye -

She saw something none else has ever seen...
A flicker of hope, of this not being a dream.
She wanted to run up to him...
But reminded herself what that would seem.

Silently she prayed, and let the tears fall.
Someone would one day would figure it all.
Till then, she sighed, and turned away,
Dance to the tunes that they play...
Email Post