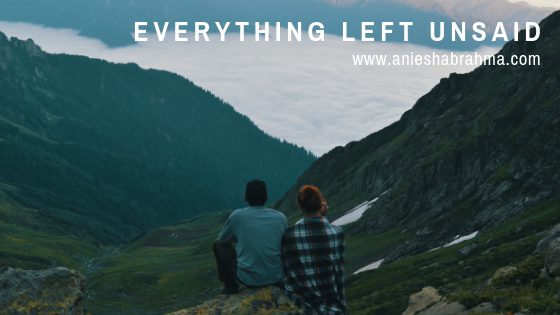 “If you don’t like where you are right now, just move. You’re not a tree.” – Anonymous

When I first came across this quote I thought it really resonated with my soul. Of course, we are not trees. If you disagree with how things are in our lives at the moment, we can actually make the effort to make a change. We are not bound by anything to stay. Except…our word, our promises and sometimes, we act out of self-preservation, and just stay when we truly want to go.

Believe me, in the last month, I have heard the phrase, “Just move on” so many times that it will probably put Fasttrack to shame! Why are we human beings like this? Why do we find it easier to just go, to just move on? Why can’t we ever figure out a way to make things work? Is it that easy to abandon everything in the moment? What happens after the moment passes?

I have often been dubbed as the person who tries to make a bad thing work. Even when things should be left as is, I try to make things work. But in the last few years, I have become someone who leaves before she gets left. How is that fair to anyone, you might ask. Well, it is because I really don’t know how to be otherwise. I watched my mother try to make a bad thing work for as long as I can remember. The first heartbreak I ever experienced stemmed from the realization no matter what I did my father would never quit alcohol. I have found the countless letters I wrote to him as I grew up, begging him to stop. He never did.

The last time I wrote an article, someone I believed I had hurt asked me why I had poured my heart out in it. It was an open platform after all. Anyone could read. A lot of you did and reached out to me. Thank you for proving me wrong and reinforcing the belief that even though people leave in the physical sense, they never truly go away from us. For that, I am truly grateful.

To the boy whose heart I broke or at the very least hurt, I am sorry I could not change. I thought things would be different this time. You were a much better friend to me than you ever were the support. The night I told you about anxiety, you brushed it away. When I tried to tell you about the dark days, the times I get trapped in my own head – you told me that was not unique. Everyone is going through something. I agree, they are…but they are not supposed to help me make sense of the storms in my head. Perhaps it is unfair of me to expect that you would have someone how figured out what the whispers in my mind were saying. Maybe I should have not have put so much of faith in you to pull me out of my pit of endless nightmares, because you have your own nightmares to deal with.

After around ten minutes of me explaining the crazy in my head, the voices, the anxiety, the financial frustration, there were only two words left hanging in the air. Did I expect you to jump up, take my hand in yours and tell me to stop freaking out? Did I expect you to reach out a placatory hand, squeeze my shoulder and tell me to come out and take a walk? Cafés after all have not been the place to talk about your feelings in the first place. Why did I make the mistake of thinking you would react the way I usually have when people confided to me about their troubles? You and I are very different people. Why did I make the mistake of thinking you would be there for me when I had not even learned how to be there for myself?

I need to learn how to be kinder to myself, nicer to myself and love myself. Because I am sure I cannot be that hard to love. If I don’t know how to love myself, how can I possibly expect someone else to do it? Isn’t it?

We can argue forever about who was right and who was wrong. The only thing we both agree on is the fact that we rushed into something that should have never happened. See? This is why you should never tell your friends you like them. It ruins everything. Khalil Gibran would agree with me! He believed people ruin beautiful things.

Maybe I ruined a good friendship thinking this could be something more. Maybe I lost something a lot more precious than someone who would give you one less lonely night. We live in a world where casual things can be found easily, and things like friendships and actual bonds take the longest time to form. And maybe I should stop going back to that evening when two simple words ended everything I had actually been looking forward to.

I cannot pretend to have all the answers. I never did. But I also realized that when something is meant to happen, it will happen. Ralph Waldo Emerson said “When you want something the Universe helps you in achieving it.” I don’t know how this Universe works, but I hope it makes me learn how to be friends with you again.