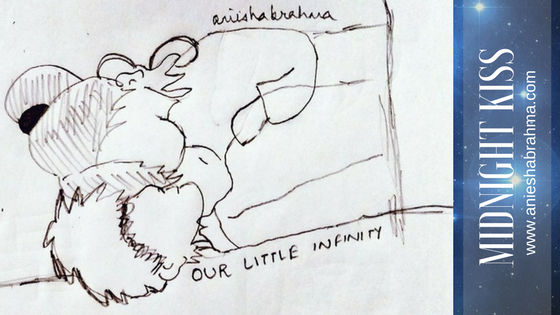 It is the first day of the New Year and I have always believed that however you spend this day sets the tone for the rest of the year. Only I didn’t count on being in a fight. A fight that might I add, I had seen coming from a mile away!

“You could have kissed anyone when the clock struck midnight,” he says, his voice almost a wail, “Anyone. And still you chose him.”

I shrug. “I thought you wouldn’t care. Didn’t you have your tongue down that pretty lady’s throat in any case to notice?”

He frowns. “That is not funny. And when will you realize that I really do care about you! Will you stop going around kissing frogs?”

I smile at his annoyance, “I am hoping one day at least one of them would turn into a prince and surprise me.”

“Oh yeah,” he challenges, “How’s that worked out for you so far?”

I gesture for him to look around. He does and he sees the same thing I had seen not too long ago. Our little infinity was built solely on our memories of each other. We had long since established no one could take that away from us.

“I am a frog you have kissed?” he asks, raising an eyebrow. “And are you disappointed that I didn’t turn into a Prince.”

I roll my eyes. “You’re not a Prince. You’re the snarky best friend that I am for some odd reason extremely attracted to. But I respect what we have going on in each other’s lives at the moment.” 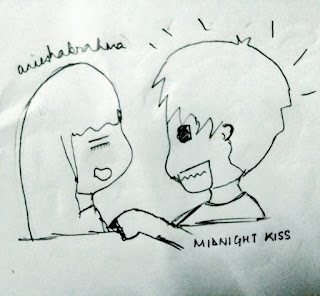 He scowls. He never did like being at the center of my arguments. “So you’re saying if I wasn’t on a date on New Year’s Eve, we would have been bringing in the New Year with a kiss?”

“Hey, I didn’t say anything,” I answer, trying to keep my mouth from twisting into a smile. “I am just saying that if you had such a problem with him you should have told me beforehand!”

“Why?” he almost shouts, “Are you daft? It’s in the freaking bro code. You don’t mess with each other’s girls!”

I burst into laughter. Then when my laughter subsides, I say, “You’re adorable when you’re mad. Also, I am your best friend. Not your girl. I am allowed to do whatever…”

“…except kiss him,” he whines, “In a house full of people why did you choose him?”

I suck in my breath and then I ask him, “Will it continue bothering you like this if I said I want to see him again?”

He smiles. I smile back at him.

Then I ask, “But who’s going to hold my hand and dance to those ridiculous numbers at tonight’s party then?”

He holds out his hand. Without hesitation, I take it.

I laugh, “Always the frog, never the Prince!”

He swoops down and gives me a peck on my cheek.

“Well, he’ll come along when he has to. Until he arrives, I’ll be here - right next to you.”
The End