Musing: The Mumbai Journal – THE MOVE


“You can recreate yourself as many times as there are cities in this world.
I think that is the reason we all love to travel.” 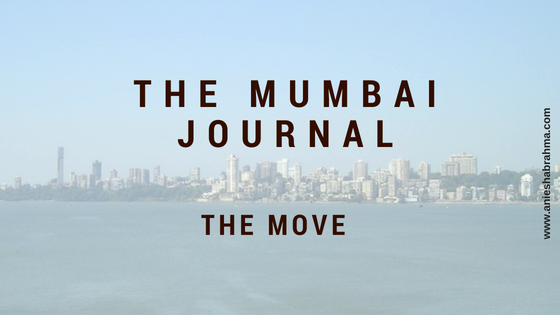 For someone who has lived in one city all her life, moving into another city becomes a big deal. For someone who is used to shifting cities, never owning a permanent address and keeps following their whim – after a while things tend to blend together. That’s when they begin feeling trapped even in their wildest of journeys, and year for something other than the wanderlust. I don’t pretend to be called by the sea, the ocean or the mountains. But I like travelling. However the thought of leaving my comfort zone wasn’t one that I was prepared for.

You see while I had always wanted to live on my own in a new city, some part of me did not agree with the notion. So even when things would go smoothly and, and I would be on the verge of receiving word of moving into a new city – things would fall apart. It was always disappointment intertwined with the tiniest bit of relief. It wasn’t until I finally threw up my arms in the air and declared the Universe, do whatever is best for me – I’m washing my hands off this whole thing, that things began moving my way.

The company I currently work for called me the day I had the thought of letting things take their own course. While there were a couple of follow ups and mails not being sent on time (not from my end – let me clarify), things finally started moving ahead. I had to join work from 2nd July that gave me exactly fifteen days to pack up my bags and move to another city. This time all I felt was excitement!
If you asked me about the last few days in Kolkata – I think all my memories have blurred together. There were a few things on my list that I knew I had to check off before I left. So in between packing my entire life into my bags, reassuring the friends in the new city I was coming, and comforting the ones in the city I was leaving – I managed to make a lot of memories. I guess the only thing I feel a little sad and guilty about is the fact that the second cat I adopted as own decided to run away from me the day I got a job in a new city.

If you have read this far, you’re probably frowning and wondering what new city I am constantly referring to and probably are a little pissed off with me at this point. Well, it’s not a secret – I have always wanted to move to Mumbai. So when the opportunity knocked at my door, I just grabbed it. It’s going be a whole week since I moved here today. And that’s why I thought this was the ideal time to publish this blog post.

I didn’t get time to meet and say goodbye to everyone in Kolkata. But I will come home soon, and I will be making more memories. I already have so many stories about Mumbai that it’s not even funny. The woman who was so happy in one place, I guess finally, finally realized her dream of moving.

P.S. The blog title kind of gives away where I moved to. ;)