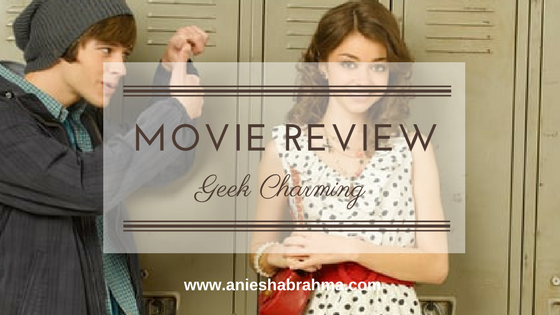 Geek Charming is a 2011 Disney Channel original movie based on the novel by Robin Palmer. The film was directed by Jeffrey Hornaday and was written by Elizabeth Hackett and Hilary Galanoy. It stars from ABC's Modern Family star Sarah Hyland and Matt Prokop. It premiered on November 11, 2011 on Disney Channel, January 27, 2012 on Disney Channel (UK & Ireland) and January 28, 2012 on Disney Channel Asia. The premiere was watched by 4.9 million viewers, the fifth largest number for a cable show of that week.

Most of us have no patience when it comes to Disney Channel Original Movies. But despite being in my twenties, I still enjoy watching the adorably kiddish movies.

I had watched this movie while trying to get through a horrible breakup last year. And I watched it again this morning. Things I couldn't appreciate the last time jumped out at me, this time around. I guess this is why people say watching a movie the second time helps you pick out the details. ^_^

The story revolves around two high school juniors, Josh and Dylan, who belong to different social strata in their school's hierarchy. While Dylan's life revolves around the ambition to win Blossom Queen in the School's Spring Formal, Josh just wants to film a documentary which would let him win a summer Hollywood Camp.

Dylan thinks starring in Josh's documentary is going to help her popularity and Josh thinks Dylan is the perfect study for his documentary. :)

Through ups and downs, the values about friendship, love, and betrayal, Geek Charming proves to be a movie most teens would enjoy. It's very relatable and I am sure the movie will leave a smile on your faces.

After all, not everything we see has to be the truth. I'd recommend this movie. Particularly for quiet and lonely holiday afternoons. ^_^
Email Post
Labels: Disney Original Movies Geek Charming movie review Teen Movie