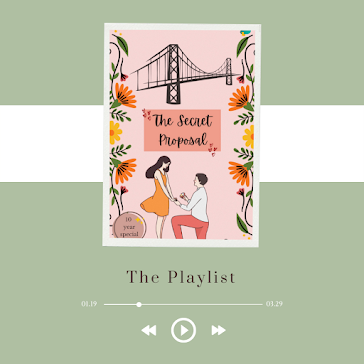 I created a playlist with the songs I think most goes with The Secret Proposal right here.
But I also thought it would be fun to link the YouTube videos for the same, and specifically talk about the scenes from the story that I think fit the story perfectly. But because I know there's a vast majority of people out there who don't want to get spoilers...I'll try to be as vague as possible.
The first one is All Too Well (Taylor's Version). It's probably because initially the dynamic between Jasmine and Veer is truly toxic. Not to mention the age difference. It's important to note I was very young when I wrote the story and I was fascinated by certain romantic tropes. As I grew up, I tried to break away from the toxic tropes and started writing believable male and female characters.
And then on my list is Love Is All Been Done Before by Jade Bird. Again, it's the whole will-they, won't-they theme for the story that made go, "Oh, that's such a perfect song for Veer and Jasmine." You know, in the 10th anniversary edition, I was really tempted to break them up. (And before you come for me, let me tell you - I did not do that.) Enjoy the song though.
Fix Me Up by A Firm Handshake is the next one on the playlist. Mostly because I love the part where she says, "stay with me just one more moment," and he goes, "it's too late, I am afraid I have to leave." It fits perfectly with the weird dynamic our leads shared in the story.

This is followed by a song that I recently started listening to and fell in love with. Dandelions by Ruth B. perfectly captures the feelings that Jasmine has had towards Veer since she was a teenager. Her crush develops into something more intense than she can understand. And she doesn't fully understand what she should do or how she should handle her feelings. Check out the lyrics for yourself and tell me if you don't think so too!
Little Things by One Direction is another beautiful song that captures the little things the two keeping doing for each other. Whether it's getting themselves out of mind numbingly boring parties, faking engagements to get their parents' off their backs, or just giving each other a break from life. The lyrics are beautiful. And why won't they be? Ed Sheeran was one of the writers of this song.

Speaking of Ed Sheeran - his song with Taylor Swift, Everything Has Changed also perfectly picks moments from Jasmine and Veer's relationship. Doesn't it?

Like every great couple, Jasmine and Veer are not without their set of challenges. What do you expect to happen when you take a twenty-five year old guy who doesn't know his own heart and a twenty one year old woman who does everything in her power to escape the real world? They'd sing The Story Of Us.

Let's face it: there were moments when Veer got on my nerves and I am the one who was writing the story. I still to this day don't understand what anyone (especially Jasmine) saw in Veer. But I can just imagine Jasmine belting out Jar of Hearts when she's super pissed with Veer and wants to end things for good with him.
I imagine the next song playing around the time Jasmine and Veer have the biggest misunderstanding, and it seems that our leads are going to go their separate ways. But there's a flicker of hope for them. Just a flicker.
Jealous Jasmine was a favourite scene to write. When she thinks she might lose Veer to his girlfriend for good. She's annoyed, but some part of her just wanted a story just like theirs. She simply wanted Something Just Like This.
To be fair, this song came out recently and my story has been around for the last ten years (in print) and twelve years (online) …but I feel this calming melody is perfect for the chapters where there's a lot of peace between all the characters.
Message in a Bottle is a happy song. Probably imagine this playing in the last chapter, when everything is resolved and the credits for the movie are rolling. No?
This one is obvious. Jasmine has this as her ringtone through the book. Also, remember this story was set in 2010-2011. This was before WhatsApp took over our lives and everyone made videos of everything, and before reels was such a huge part of social media.
Veer doesn't understand or is oblivious initially to how much Jasmine is in love with him, at the beginning of the book. It exhausts her to constantly pretend that she's not in love with him. And she becomes unnecessarily mean and rude towards him. But I can just picture her singing Bubbly in her head, all of the time.
And finally, how can we forget that there's always a Moral of the Story?
If you have read The Secret Proposal, let me know which song you think fit a scene/the couple perfectly...and it might just get added to the official playlist on Spotify.
I hope you enjoyed reading this blog post. Let me know if you would like playlists for my other books as well. Plus, which one should I start with?