Mahatma Gandhi once said, ‘The greatness of a nation can be judged by the way its animals are treated.’ I am not entirely sure about this nation - but speaking to FurrFolks last evening about their attempt at making the world a better place for stray animals, I am persuaded to believe that maybe we are slowly moving towards something better.

Founded in 2017, a Facebook post was put forward by what is now known as FurrFolks. I had the honour of speaking to co-founders, Rumela Mitra, Sk Basit Ahmed, and their PR Lead, Mausam, about what started this initiative where they want to see it eventually grow into. 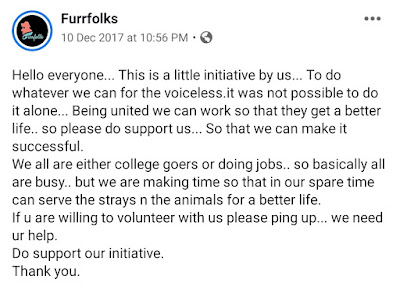 So what happens when a group of animal lovers get together? In a nutshell, all good things. For Rumela, Basit, and Mausam, the journey wasn’t unlike one undertaken by other NGOs. (Perhaps the fact they are just fresh out of college and have a zeal to do something good in this world, adds fuel to their desires.)

Rumela tells me that after they founded FurrFolks in 2017, their attempts to reach out to people via social media garnered 50 members.

“We were happy, but we also had to learn everything on the spot,” she says, “we had to figure out how to get funds. For now, we are getting it directly.”

“We registered FurrFolks as a NGO,” Basit adds, “but due to the lockdown a lot of our formalities have come to a standstill.”

What they aim to do is mass scale feeding for all stray animals. They tell me their operation currently feeds around 1,000 stray dogs! They have volunteers in every area that has stepped up to their pleas. Along with regular meals, the stray dogs in particular are also fed Marie and Parle-G biscuits.

“We are looking for a way to install automatic feeders in neighbourhoods,” Mausam tells us, “It would definitely help us.”

We touched upon the subject of that being a rather expensive process, when they let me in on their long term plan of opening a shelter.

“Our target is to open a shelter. We can treat the stray dogs for free, and the breed dogs would have to pay a charge,” all three of them believe, “besides, it will be easier to get a vet to consult us if we have a shelter.”

[TRIGGER WARNING]
Rumela decides to tell me a rather heartbreaking story of a pup named Champ at this time. She narrates the story of how he had a cut that split open his hind side...and how they had moved heaven and earth to save him.

“It was around 15k just to treat him,” she says, “but we didn’t mind. We raised funds, and we tried our best. In the end we couldn’t save him.”

The story naturally breaks my heart and I am sure it breaks yours.
[END OF STORY]

However, broken hearts and tear-stained pillows will not save pups like Champ. Because we all know that there are more cases like these. (And people are inherently cruel.)

“One thing we want to also focus on are cab services and ambulances,” Basit says, after the pause in the wake of Champ’s story. “Emergencies can happen any time. If we have a car at our disposal - it will be easier to be in control of the situation. We do have a car for hire in the works at the moment. So let’s see…”

“I agree that emergencies can happen anytime,” Mausam adds, “that’s why we want to also start a ParaPet Emergency Training for special cases. There are times when the vets or the assistants refuse to come down to help us. There was a case where one of our recuses needed saline - we were prepared to pay anything to get that help - they refused.”

At this moment I remembered vaguely how my mother had once offered to pay our cat, Pippo’s vet, the cab fare - just so he could come down and check on him! It was a one-off incident. Our vet wasn’t a well to-do man and he rode his bicycle everywhere. It was in 2017. It’s astonishing that things still haven’t changed.

“They are unavailable at times and it puts us in a terrible situation,” Rumela says, confirming my belief that things would need to change if we wanted things to get better.

“A shelter would really help,” Basit says, “It would at least make it easier for us to get in touch with vets. It would also add credibility to us. For now, we are unable to take up cases of vaccination, ligation, or neutering. We’ve been referring them to another NGO for now.”

“Sometimes," Mausam tells us, "we get calls from people panicking about cars coming to take their dogs and cats from the neighbourhood. When we ask them what does the car say - and it's usually the name of an animal welfare center - we have to explain why the animals are being taken.”

I sigh. It’s something we used to face in my neighbourhood all the time. No one would step up and take care of the animals. But the minute we’d go downstairs to do our bit - we would be welcomed with so much unsolicited advice.

During the call, I’m also greeted with not one - but three cats and one dog! Honestly, it’s a miracle I didn’t lose track of what I was asking the FurrFolks. I ask them about their plans for the future - besides opening the shelter.

“We want to conduct workshops in schools for kids,” Basit says, “they should be taught about animals and animal welfare in general.”  I have to agree. Kids who are raised around animals grow up to be more compassionate and kind. Besides, cruelty is not an inherited thing - it’s learned.

Of course one of their major challenges is getting enough money for the treatment of all animals - they are heavily dependent on the goodwill of the citizens. From my personal experience, I have only donated to causes where I knew the people. There have been so scams that it is of no surprise that most people are skeptical about donating.

“Oh we do everything in our power to put people at ease,” Rumela says, “We are very transparent about our donations received - and we upload all our bills. And besides this we have even given free online or telephonic consultations to others when their adopted strays were in trouble.”

“We are dealing with a lot of challenges - people will give food easily to strays - but mostly leftovers. But they are so uninformed about ligation, vaccinations, and even basic medicines,” and as she says this, I get a painful flashback of finding out that my cat’s bruises needed to be treated with betadine. There was a time I would be up until 3am, crying helplessly, going on endless Google Search loops to figure out how to save the idiot of a cat whose superpower was constantly injuring himself!

I’d gather up random medical knowledge on behalf of cats without realizing it - because my motivation to be a better owner to them was out of love. My mother's cat has been the pill for a long time and she doesn’t miss a dose, by the way. I hope other animal lovers are just as eager to learn to take care of their adoptive pets as we had been back then.


“We haven’t ever charged for treating our adoptive cats, dogs, or even birds,” she continues, “Sometimes, we have even continued the medication for free until they get better.”

But does that mean everything is running smoothly for the FurrFolks? Well, the purpose of the superhero would not be glorified if there were no arch nemeses trying to bring him/her down. They get their fair share of hate and they receive negativity.

I didn’t get to tell them this yesterday but I will now - it doesn’t matter what human beings are saying. The wagging tails of all the doggos you’ve saved, the purring meows of the cats you probably nursed back to health, and the flight of the birds you’ve set free are the only rewards and praises you should look for. You are doing an amazing job. Keep at it. For if fairy tales are to be believed, good always triumphs over evil.

If you would like donate to FurrFolks, please find the details below:

To get in touch with each of the awesome individuals who are the core team for FurrFolks - refer below: 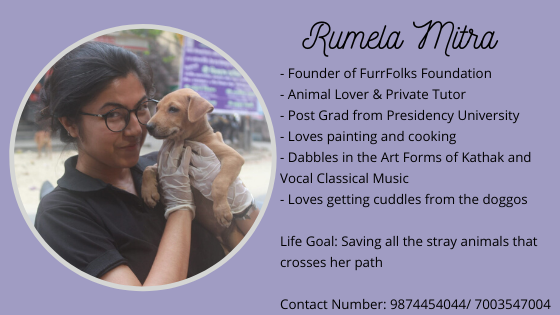 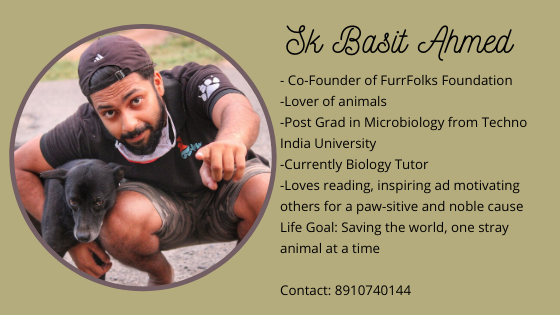 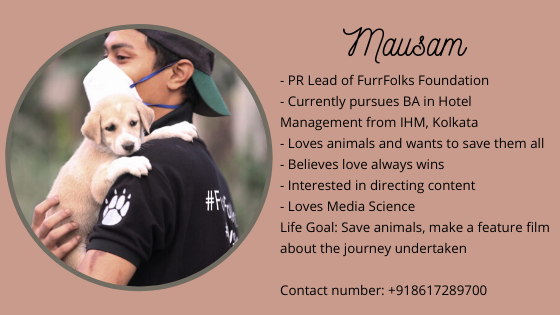 (We were introduced by Anumita Ghosh. You would remember as the awesome young woman who’d once designed Harry Potter bookmarks for BUZZ Magazine and illustrated this blog post earlier. She has also designed the logo for FurrFolks Foundation!)