7 Secrets About My Debut Novel ‘The Secret Proposal’ 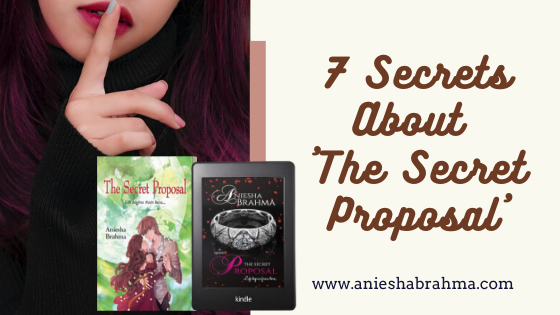 It is a well-known fact that I was almost a decade younger when I wrote The Secret Proposal. I was completing my Masters in Comparative Literature back then – and I used to moonlight as a writer of Fan Fiction on fanfiction.net. I read on their board that they had a sister site – Fiction Press – where authors interested in sharing their original content could publish their stories. Now, I had been plotting my journey of becoming an author from a very young age. Six, to be precise. I always knew that is what I wanted to do. From the first time I came in touch with fairy tales. I was always telling myself a story in my head. It seemed like a good idea to make it into my career. I am super grateful to my family for never crushing my dreams by telling me to pick a more realistic career. (Well, my sisters a scientist and my brother’s an engineer – I just wanted to mix things up a little. An author seemed like the perfect thing to finish the set.)

But I digress. Coming back to the secrets of The Secret Proposal, let’s recap all the overly popular and common knowledge.

I wrote him at time when everything around me was glorifying characters like him as a desirable hero. As I grew up and learned more about this life and comprehended the human psyche, I understood what a truly problematic character I’d brought into our beloved fictional world.

I wrote several books after my debut novel.

My publisher didn’t want to publish a second book of mine citing that the first one did not do so well. I think my debut is what one would call a sleeper hit. It gained fans and popularity over the course of several years. And they still loved my first book best of all!

Because I was trying to make my younger readers understand what kind of a person they should aspire to become / share their lives with. Every time I got a mail or a message telling how amazing Veer is, I’d quietly stir them towards Zayn, Ayoub, Joy, or Ashwin.

I have always engaged with the fans of the book.

Trying to understand what made The Secret Proposal and Tanveer such a huge hit, that even today people just love to talk to me about them both.

Yes, yes – if you are the fans of the book and in particular of Mr. Tanveer Bhattacharya himself – you have become impatient at this point. I wouldn’t be surprised if some of you scrolled past the intro and began reading this part of the blog post. So without further ado, here are the seven secrets about The Secret Proposal (some of you might know all of these already though).

Tanveer Bhattacharya was based on my real life childhood crush.

We continue to be friends to this day. He has no idea that he was the inspiration for Veer and we’re going to keep it that way. Jasmine and his age difference is the real life age difference between us. [And I can already see people who’ve known me at thirteen trying to figure out who he could be.]

The Secret Proposal was originally called The Strange Proposal.

Yep. I found the whole concept of Veer asking Jasmine to get fake engaged to him rather strange myself…but hey, those were the trends back in 2012. My publisher disagreed. We brainstormed a lot of names. Finally settled on this one. Thankfully, they have let me name my subsequent books!


I spent almost all of 2011 writing The Strange Proposal and sharing chapters on FictionPress.

Until 2011 end, I think, I did not have a personal laptop. I would have to do all my creative writing either by hand or on the family computer. We had designated folders and I think my old, abandoned stories are still there. But every week, diligently I would write the chapters for The Strange Proposal. It gained quite a following too. In fact, because I was uploading one chapter a week – to keep my readers hooked I would always, always end with a cliff hanger.

The Durga Pujo chapters were added later. After the first draft was complete.

If you, like my sister thought Jasmine was coquettish for constantly fainting, I don’t blame you. In the first draft – she didn’t faint quite as much. I have heard stories of people getting overwhelmed during Durga Pujo and fainting. I thought Jasmine was behaving like any highly stressed out person would. I forgot she’d fainted before and after as well!!!

I wrote the book without a plot outline. So I had written myself into plot holes several times.

One of these instances was when Jasmine sneaks into Veer’s house. I never had a clear idea of their homes. I was making up stuff as I went along. And when you do not have a map to where you want to go – you stumble, and trip, and drive yourself up the wall – and ultimately reach your destination. I immediately began to read up plotting novels, attended workshops, and downloaded as many free resources I could scour on the internet as I could, to help me improve my writing. I would spend days planning my subsequent stories before I started.

My friend Chiquita literally forced me into getting the book published. Later on, she was one of the driving factors for me to start BUZZ Magazine.

So it all started with Chiquita and me opting for the same special Area Studies classes. One day she said that I keep talking about writing a book – and maybe it was high time I looked into getting published. She asked if there was anything that I had ready which could be sent to publishers. (I knew the drill, having researched how to get published since the time I was fourteen.) I told her about the story I’d written on FictionPress and how people seemed to enjoy it. She encouraged me to write to publishers...and now here we are. She was the first person I’d either called or texted, after my mother and my sister, to share the good news.

Rupa Publishers were interested to see more chapters of the book, but I had already signed a book contract.

I had reached out to several publishers once Chiquita drove it into my head that I should get published. But I got the mail from Rupa Publishers during a time I had already gone ahead and book was going get printed by my present publishers anyway. Getting a book published by Rupa has been sitting on my bucket list for a long time now.

Latika’s wedding chapters were based on my actual experiences during my sister’s wedding.

My sister had gotten married the previous year. I remember vividly having to go without sufficient sleep for seven days in a row. Being told constantly that this was a huge change. Even down to the scene where Latika tells Jasmine to learn how to apply kajal! (I was just a college kid – had just about hit the legal drinking age! It was 21 back then.) And it is needless to stay Latika was inspired by my sister, with a lot of creative liberties. My sister doesn’t really like her representation in the book. Can’t say I blame her.

A talk with a friend of mine regarding childhood crushes and how unattainable they were was what put the thought of writing this book in my head in the first place.

Original version of the story.

The absolutely first draft of the story was 60-66K words. I still have that somewhere. Publishers wanted to cut it down to 50K and a lot of fan favourite scenes (from my FictionPress days) was slashed. Let me tell you – in that version – things get…umm…hot and heavy between our two leads way more than the version that was published!


Over the last few years, I realized something. I could run to the ends of the world but The Secret Proposal…life begins from here (again a subtitle I wasn’t too fond of) would still be written by me. When people search for me online, they would realize I wrote that book and it was published in 2012. So instead of running away from it, I’m embracing it. I was an absolute kid when I wrote it. And despite everything, it will always hold a special place in my heart.

P.S. Most of you know that I used to run an e-zine called BUZZ Magazine. Well, we’re back, baby! And this time for good. Do check us out for more bookish content.