#BookReview: What If It's Us 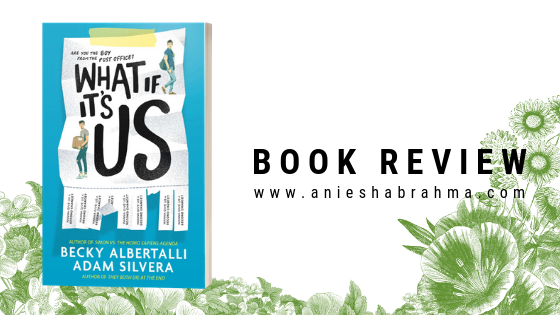 From NYT bestselling authors Becky Albertalli (Simon vs. The Homo Sapiens Agenda) and Adam Silvera (They Both Die At The End) comes a long-awaited collaboration about two very different boys who can't decide if the universe is pushing them together or pulling them apart. Meet Arthur and Ben. Arthur is only in New York for the summer, but if Broadway has taught him anything, it’s that the universe can deliver a show stopping romance when you least expect it. Ben thinks the universe needs to mind its business. If the universe had his back, he wouldn’t be carrying a box of his ex-boyfriend’s things. But when the boys have a chance meeting at the post office, they leave wondering what exactly the universe does have in store for them. What if - in a city of eight million people - they can't find each other again. What if they do . and then can’t nail a first date even after three do overs. What if Arthur tries too hard to make it work and Ben doesn’t try hard enough. What if life really isn’t like a Broadway play. But what if it is.

Adam Silvera was born and raised in the Bronx. He has worked in the publishing industry as a children's bookseller, marketing assistant at a literary development company and book reviewer of children's and young adult novels. His debut novel, More Happy Than Not, received multiple starred reviews and is a New York Times bestseller and Adam was selected as a Publishers Weekly Flying Start. He writes full-time in New York City.

Becky Albertalli is the author of the acclaimed novels Simon Vs the Homo Sapiens Agenda (released in 2018 as the smash hit film, Love, Simon), Leah on the Offbeat, and The Upside of Unrequited. She is a clinical psychologist who specializes in working with children and teens. Becky now lives with her family in Atlanta, where she spends her days writing fiction for young adults.

I do not remember the last time I was this happy reading a book! The tale of Ben Alejo and Arthur Seuss made my heart so warm and fuzzy, that I started believing in the existence of love and magic again. Two boys who were perhaps never supposed to meet…or were supposed to meet because the universe gave them the nudge! Something that I truly appreciated about this book is how big the story was on second changes and do-overs. I understand that in real life these kinds of things seldom happen. But aren’t we all waiting for the best possible thing to happen to all of us?

I want to read the book all over again because I loved it so much. While I understand that both Ben and Arthur jumped through several hoops to be in each other’s lives, I began to dream about getting something that is worth fighting for. There is no point wanting to fight for someone who is going to leave in the middle of the night when the darkness creeps in, and you scream because the nightmares in your head are just too real…isn’t it? People always leave, we are told. Ben and Arthur prove that sometimes people who are meant to be together have a habit of popping back in each other’s lives when you least expect it.

A strong cast of characters support these two as their love story plays out in the backdrop of New York. What If It’s Us at its core is the story about love and how richer everyone us would be if we just took a step back and didn’t take life as seriously as we keep being told to take. Sometimes, it’s really not at all about the happy ending. Sometimes, it’s just about the story. Isn’t it?

Favourite Quote: “But maybe this isn’t how life works. Maybe it’s all about people coming into your life for a little while and you take what they give you and use it on your next friendship or relationship. And if you’re lucky, maybe some people pop back in after you thought they were gone for good.”
Email Post
Labels: Adam Silvera Beck Albertalli book review Collaboration What If Its Us YA Young Adult Fiction