Musings: 5 YA Books That Talked About Mental Health 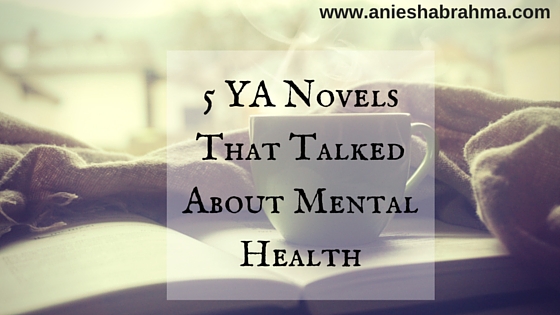 For most of my childhood, I was depressed and anxious. I didn’t know why or how. I was depressed due to a variety of personal reasons and though my mother tried to make me tell her what was bothering me, I never could. Not because I didn’t want to tell her but because I had no idea what to tell her. As I was growing up the term ‘depression’ was very casually used. It wasn’t supposed to be a big deal. People felt sad sometimes and the next day, they were magically better.

Sleep. You’ll feel better in the morning.
That’s like saying, have you tried switching it off and restarting it again?

And it’s horrifying. How can you equate human emotions with that of a stupid mobile phone or TV? How can you simply ‘snap out of it’ if you’re suffering from depression and anxiety and you’re too young to know what these are in the first place!

Previously, Privy Trifles wrote a post about her own battle with depression as a child. Reading her article made me realize that with all the talk that goes around about mental health the children get utterly ignored. It’s always the stories of someone who suffered a heartbreak, who failed in something they’d set their heart on, someone who is on the other side of eighteen who gets even the smallest attention we are offering. That really got me thinking. 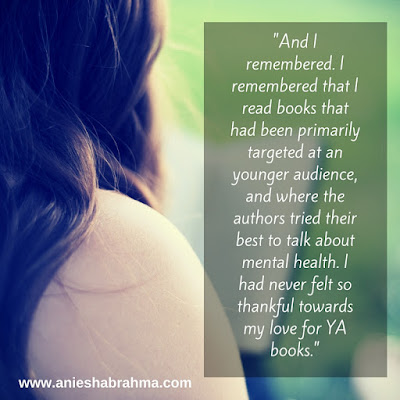 And I remembered. I remembered that I read books that had been primarily targeted at a younger audience, and where the authors tried their best to talk about mental health. I had never felt so thankful towards my love for YA books.

Here’s a list of the books that I had read and would personally recommend, that spoke about mental health.

Right after Michael Moscovitz leaves for Japan, Mia Thermopolis spirals into depression and until her parents force her to go see a therapist she pretty much sinks to an all-time low. Mia already had issues. She had an overbearing best friend in the form of Lilly Moscovitz, who didn’t like it when Mia opposed any of her plans. What I liked about the book was how well Meg Cabot handled the scenes with the therapist. There is nothing wrong in seeking help when you most need it. And Mia needed all the help she could get. She had to be forced to go see the therapist...but in the end, it was all to help her cope with her life.
Will Grayson, Will Grayson

An excerpt from this novel will give readers an idea about what David Levithan and John Green were driving at with their novel:

“i think the idea of a "mental health day" is something completely invented by people who have no clue what it's like to have bad mental health. the idea that your mind can be aired out in twenty-four hours is kind of like saying heart disease can be cured if you eat the right breakfast cereal. mental health days only exist for people who have the luxury of saying "i don't want to deal with things today" and then can take the whole day off, while the rest of us are stuck fighting the fights we always fight, with no one really caring one way or another, unless we choose to bring a gun to school or ruin the morning announcements with a suicide.”

The Perks of being a Wallflower

When we talk about YA novels that have dealt with mental health, it would be a gross injustice to not talk about this novel. ‘Charlie’ had been the victim of abuse from someone he loved and because of his conflicting realities, he suffered from depression. We do not understand because reading his letters, he sounds just like any other teenager going through the traumatizing experience of high school. But the novel serves as an eye opener to everyone who does not take mental health of young adults seriously.
Love Letters to the Dead

The story of Laurel and her sister, May, had most certainly done a number on me. Because the story is narrated via the letters that Laurel writes to people who are dead...you do not realize the underlying issues of mental health until you’re well into the novel. This is a very good reflection of what mental health issues are like in real life. It doesn’t just knock on your door and says, “Surprise!” But slowly creeps in and one thing just leads to another. What particularly loved about this novel was the fact that it was guilt that had disturbed the mental peace of our young protagonist...but she decides to seek help. No one in her life treats her issues as trivial. In order to understand more about mental health awareness, I would suggest that everyone read this book.

All the Bright Places

More recently, I read the book that everyone’s been talking about: All the Bright Places. It was the tagline that will stay with me forever:

This is the story of a girl who learns to live from a boy who wants to die.

Initially, Finch seems like nothing short of an asshole and you don’t want to spend a minute with him. But as he opens up about himself, you’re slowly drawn into his world. You’re going crazy trying to figure him out. You’re lining up post it notes against the walls, trying to figure out his cryptic messages. And you’re filled with this irrational desire of wanting to save him. Yes, he’s fictional. So you begin to think about all the Finches that you might know. The Finches you didn’t take the time out of your busy lives to save...and you begin to notice young adults in a whole new light. Mental health is not just about adults who’ve hit rock bottom, but also for young adults who are doing their best trying to find their ground in a world determined to knock them off their feet! This book introduced me to a certain kind of depression and I am so thankful for it.

YA novels are not just about vampires and werewolves and magic and supernatural. They talk about real issues. They start conversations that young adults should be having with their parents. So we bring our series of Mental Health Awareness to end, but giving you the list of YA novels you could check out if you would like to know more about mental health. Whoever said YA novels are not for adults, never read any of the books on our list!

With this blog post, we come to the end of our series for Mental Health Awareness Month. I would like to thank Namrata, Dhivya and Preethi for being a part of this journey and writing posts for the issue, even when they were busy with their lives. I am truly grateful to you three. To all the readers, thank you for reading and sharing the posts. We hope you consider joining us next year in May as we do a similar project. I sincerely hope our posts have found their way to those who really needed help. If you happen to be struggling with your demons, please remember that you're not alone. And you're loved.