Movie Review: He's Just Not That Into You...Is He? 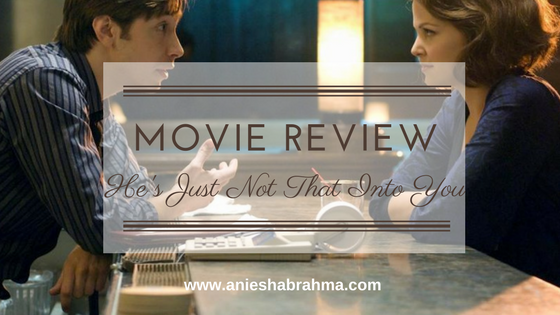 Yesterday night, tired with studies, tired with book promotion and mostly tired with the mundane college life, I decided to finally watch the movies rotting in my computer for over two months now. I will admit that when I first began watching the movie, I was less than enthusiastic. My best friend had recommended the movie - but our tastes have always been miles apart. Still, while I munched on dinner, I gave this movie a shot.

He's Just Not That Into You, boasts of an ensemble cast with the likes of Ben Affleck, Jennifer Aniston, Drew Barrymore, Jennifer Connolly, Bradley Cooper, Ginnifer Goodwin, Scarlett Johannson, and Justin Long...all of whom contributed with above average performances. The movie was more character driven than plot driven, and all the characters are connected to each other in a full circle.

At the heart of all the melodrama is Gigi (Ginnifer Goodwin), who dissects every single action of every single man she dates, and harbors on almost stalker like attitude. It is with advice from Alex (Justin Long), that she makes changes in her behavior, and it is funny to watch their story unfold...

Gigi's co-workers are Beth (Jennifer Aniston) and Janine (Jennifer Connelly). While Beth wishes to get married to her longtime boyfriend Neil, who is anti-marriage, Janine has coerced her longtime boyfriend to get married to her...but their marriage is far from happy...for her husband, Ben (Bradley Cooper), gets attracted to Anna (Scarlett Johannson).

Anna shares friendly terms with Connor (Kevin Connolly), who had once gone out with Gigi and never called her back. He is also Alex's friend. Her friend, Mary (Drew Barrymore), works at a local gay newspaper, and meets men mostly online...

This movie is about the "happily ever after" every romantic tale has spoken off. And the thing we are told, right from our childhood, that when a boy is mean to you, it is because he likes you... The movie questions why can't we just accept that He's Just Not That Into You.

What I loved about the movie is the changing relationship between Gigi and Alex. She grows from a naive young woman, hopelessly searching for love, into a woman not afraid to take control over her life. And she certainly puts a wake up call in Alex's direction.

It is a nice movie that one can surely enjoy during their dinner, after a perfectly tiresome day. As we tend to identify with characters, and since there are an assortment to choose from in this movie, I am sure you won't feel you time was wasted after watching it.