Short Story: Playlist for the Heartbroken - #AChristmasTreat by Aniesha Brahma

Someone once asked me,
“Why do you love music so much?”
I replied,
“Because it’s the only thing that stays
when everything and everyone is gone.” 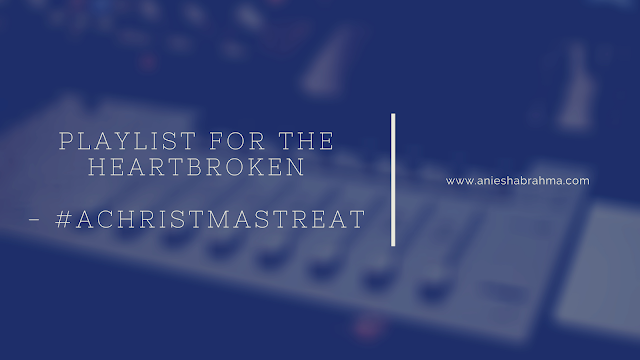 There are times when we are overwhelmed by sadness, so consumed by our grief that we are unable to even get up from our beds. We want nothing more than to put a blanket over our heads, and not wake up from the sweet nothingness that sleep seems to offer. Our only companion during this time is the playlist on our phones or our iPods. Because music seems to understand us in a way no human beings ever can.

This world is gonna burn...
burn, burn, burn,
As long as we’re going down
Baby, you should stick around...

Anika had plonked in her headset, and raised to the maximum volume. The tears she had spent the night crying had dried on her cheeks. She had drifted off into an uncomfortable sleep at dawn. She stirred awake as she felt two paws kneading her tummy urgently. Opening one eye and then another she found herself staring back into the orb like eyes of her tabby orange cat, Fluffy.

“Hi, Fluff,” she said in a hoarse whisper, “Give me a minute, I’ll get your food for you.”

With what seemed monumental effort, Anika got out of the couch where she’d sought refuge after coming home from work the previous night. She knew she was just going through the motions of everyday life, because to her it was impossible to go back to normalcy after what had happened!

While her cat lapped up the milk she put in a saucer for her, Anika switched to another song on her playlist.

But she couldn’t keep listening to it anymore. It was painful because it made her remember the first ever date that she had gone to with Vikrant. She had this song stuck in her head on loop during the course of the evening.

“You didn’t need to. I can tell from the look on your face that you adore me.”

She had laughed. It seemed like that had happened only yesterday. She stifled a cry, and scrolled down on her playlist, looking for the one song that might set everything right.

Up here in the cold, thin air I finally can breathe
I know I left a life behind but I’m too relieved to grieve!

And suddenly she was dancing by herself, clutching her phone in one hand. The peppy, upbeat song seemed to have touched something in her that had lay dormant for all these years. For she believed that she had been born with two left feet! However, anyone who would have seen her right now would know that she could dance with reckless abandon. When the song ended, she sang till the last note and danced until she twisted her ankle and fell down on the sofa.

“What other songs do I have on my playlist?” she asked herself, as she scrolled down.

But this song was breaking her heart a little. She couldn’t go on listening it. It pulled at the strings that were holding her fragile heart together. She shook her head, and immediately looked for another song that wouldn’t act as a trigger for her extremely volatile mood.

Too long I’ve been afraid of
Losing love I guess I lost,
But if that’s love
It comes at much too high a cost!

Once again, she sang along and danced to the tune. She only stopped, when she saw Fluffy sitting in a corner, with a rather judgemental look on her face.

“Oh, come on, now,” Anika muttered, “Don’t give me that look! You never had your kitty heartbroken because in your world there’s no such thing as always and forever. You guys just fool around and then leave whenever you wish. Unlike us humans who are suckers for promises and this undying faith that the person we love wouldn’t leave us!”

“Meow,” was all Fluffy said.

Maybe you’ll never see in you what I see,
The little things that you do that make me go crazy
I am not crazy. You’re perfectly perfect to me.

This time she collapsed on the bed and didn’t stop the tears from cascading down her cheeks. She couldn’t deal with the pain anymore. No one ever can. Not when they’re left without a reason, without an explanation. Just a cold brutal text which said, I don’t think this is working anymore. I’m sorry. Goodbye. Half a dozen calls and messages had gone unanswered, and it had been over a week now. She had wanted nothing better than to stay in bed all day long and wallow in self pity. But she was no longer in college but in the world of ‘adults’. She didn’t have a choice but to get up and go into work the next day, pretend like nothing had happened. That her heart hadn’t been ripped out from her chest and stamped on, and handed back to her! Yes, pretend. Because as she faked it, she realized she was good at pretending to be fine. She was good at reciting the replies people wanted to hear.

How could she have not seen this coming? She had always known when to disappear, before someone else could hurt her. What made her make this oversight, she wondered!

She took a deep breath and switched off the music player. She pulled out the headset from over her ears, and kept her phone aside. Getting up from the sofa, she stretched and said aloud, “Well, that was a good start to the weekend. I wonder what the rest of it will look like.”

Someone rang her doorbell rather impatiently. She answered the door, wondering who on earth was paying her a visit this year in the morning. A young man stood there, holding Fluffy in his arms, looking rather cross.

“Could you kindly keep your cat inside your house? I have two dogs who just might tear him into pieces!” he thundered.

Fluffy chose this very moment to leap out of his arms and go her own way.

“Firstly, my cat’s a girl. And two, I’d love to see your dogs try, and three, I have no idea how she slipped away!” Anika answered, equally cross.

“Well, I’d presume if you sang and dance like a psycho, switching music genres, anyone would run away from you!”

Anika opened her mouth furiously to defend herself, but stopped short and asked, “How do you know that?”

“Sorry,” she said at once, “I didn’t realize anyone could have read me...”

He sighed, “Breakups are a waste of time, as is love and this undying faith in happily ever afters.”

“Oh, come on,” she groaned, “Why would you say that? You’re such a buzzkill!”

“And I have you as an example,” he said. “If you ask me, right now you should go out and have fun. We have enough worries in life, don’t we? Do you really want love to be one of them?”

“Hmm,” she said, pondering over his question.

“Anyway, I should get going,” he said.

She slammed the door on the face of her very confused neighbour and got back to her phone’s playlist again.